Part 1 of the 'Anthony Burgess and James Bond' Miniseries

In his Preface to the Coronet Books editions of the original Ian Fleming James Bond novels first published in 1988, Anthony Burgess (1917-1993), author of (most famously) the controversial dystopian novel A Clockwork Orange (1962), among other notable novels and non-fiction, gives an interesting introduction to and defence of the Fleming Bond novels entitled The James Bond Novels: An Introduction. Of particular interest in this introduction is the following passage:

“It is important, I think, to stress the point that, after the early films, whose budgets were too low to admit of too much extravagance, the James Bond whom Fleming created has only a nominal connection with the leering hero of the screen. This also goes for the titles: what has the film Octopussy to do with the brilliant short story in which Bond has a very marginal role? It is true that Fleming forbade the film adaptation of The Spy Who Loved Me, but that was no excuse for attaching the title to a very unflemingian [sic] hotchpotch. It is time for aficionados of the films to get back to the books and admire their qualities as literature.”(1)

Burgess is making an entirely valid point here of course, but when his history with the film Bond is taken into account the contradiction between his words and his actions can be seen all too clearly, making his above comments, especially about the film of The Spy Who Loved Me (1977) appear highly ironic indeed, but perhaps that was the point. To the uninitiated, there is the strong suggestion here of some double standards on the part of Burgess here in this preface written some ten years after the release of The Spy Who Loved Me in the cinemas and some eleven years after his writing of a screenplay for the film. Although Burgess' screenplay was parodical in nature with the requisite elements of comic writing and clear ridicule of the direction the contemporary James Bond films were going in it is acknowledged that at least one of his ideas for the 1977 film (that of the huge submarine silo aboard Karl Stromberg's ship The Liparus near the end of the film) is recognised as having been taken from Burgess’s otherwise knowingly daft script. Indeed, Burgess had by the time he came to work on The Spy Who Loved Me in 1976 already scripted the film Moses the Lawgiver (1974) and after his involvement with Bond he would go on to script the films Jesus of Nazareth (1977) and A.D. (1985), so he was not merely an author turning his hand to writing a Bond screenplay as a novice; he did have past experience in the art of scripting a film.

In Steven Jay Rubin’s magisterial The James Bond Films (1981) he states that “The writing of The Spy Who Loved Me was something of a nightmare. No less than twelve script writers had a crack at it and there were at least fifteen different drafts of the script on Broccoli’s desk at any one moment. It became a question of who could be the most innovative and yet stay within the bounds of credibility.

On this new project, the writers were asked to work from scratch, bearing in mind a guideline from Broccoli who thought that “The Spy” in question should be a Russian agent who falls in love with Bond.”(2)

On the screenwriting of The Spy Who Loved Me Steven Jay Rubin further writes:
“[Anthony] Barwick left the [script writing] project and was followed in order by Derek Marlowe, Sterling Silliphant, John Landis and Anthony Burgess (the author of A Clockwork Orange). Burgess developed the most outrageous of all the scripts, an undisguised parody of the world of James Bond.”(3)

Further to this, in Kiss! Kiss! Bang! Bang!: The Unofficial James Bond Film Companion (2000), by Alan Barnes and Marcus Hearn it is confirmed that “the huge submarine silo seen in the finished film was reportedly Burgess’s inspiration.”(4)

Burgess’s involvement with the script of The Spy Who Loved Me in 1976 and his attendant send-up of the world of the cinematic James Bond greatly contradict what he would later write in his Coronet Books Bond novels Introduction in 1987. It is most odd indeed that Burgess would mark out a film that he wrote a draft screenplay verging on parody for and then later criticise the finished film as being “a very unflemingian [sic] hotchpotch.” If one were only to consider his 1987 comments, one would have assumed (quite wrongly as it turns out) that Burgess would have been the very man to put that right!

Of course, there is another side to this particular coin here, as is often the case when one digs deeper into the facts. The whole screenplay written by Burgess for The Spy Who Loved Me could alternatively (and probably more accurately) be read as a “piss-take” or overt parody of the direction that the Bond series was heading in the late 1970s rather than as a truly serious attempt at writing a 1970s James Bond film, with all that that entailed in terms of style and set-pieces. In ready support of this analysis of his outlandish screenplay for The Spy Who Loved Me is the fact that Burgess had earlier written a spy novel entitled Tremor of Intent: An Eschatological Spy Novel (1966) which Burgess conceived as both a timely (the 1960s were, of course, the height of the Spy Craze in novels and films and on television) comedic reaction to the po-faced “seriousness” of the Len Deighton and John Le Carré spy novels and the more fantasy-laden James Bond novels of Ian Fleming and his then many imitators in print. Indeed the Ian Fleming James Bond novels have for a long time been considered as the dividing line in spy fiction between the more fantasy-laden thrillers and spy spoofs/take-offs and the more gritty and realistic spy thrillers by the likes of Len Deighton and John Le Carré as well as the undisputed masters of the docu-thriller and the techno-thriller Frederick Forsyth and the late Tom Clancy respectively. 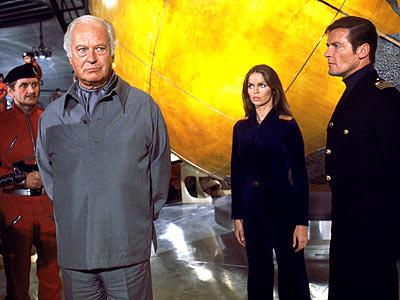 Whatever the reason for Burgess’s parody of the James Bond films in his seemingly serious attempt to write a latter-day Bond film it is a point well settled by this present time that the decade of the 1970s was the most decadent in the history of the James Bond films, starting with the high-camp spoofing of a Bond film with Diamonds Are Forever (1971) and ending with the Space-Age spectacle of Moonraker (1979). Where the earlier 1960s Bonds had focused on character and plot the 1970s Bonds had focused on outlandish spectacle and excess at the cost of character, a move the Fleming purist fan Burgess obviously very much disapproved of for well-founded reasons and when his screenplay attempt is read in light of this fact it does make much more sense as a reaction against this direction. His outlandish parody of all that he saw the Bond films had become by the late 1970s could be easily read as a polemic against the increase in spectacle and stunts at the expense of the corpse of the James Bond character construct. Guy Hamilton himself, the director of Goldfinger (1964) and three other Bond films, even believed that the Bond films could never really ever be taken seriously again after the inclusion of the trick Aston Martin DB5 in Goldfinger. It was heavily-laden with gadgetry including front-firing machine guns hidden in the lights, a rear oil slick facility and rear thick black smoke projector and of course the infamous ejector seat for those troublesome passengers!

No doubt Burgess would have been pleased (as any Fleming purist at the time no doubt was) that the Bond films returned to a back to basic more grounded in reality approach at the beginning of the 1980s with the release of For Your Eyes Only (1981) with Roger Moore arguably giving his best (and not coincidentally the most Flemingesque) performance as Bond much more in line with the Fleming originals as the film was closely based on two Fleming short stories and part of a Bond novel to boot. Whatever the real reason for his spoof Bond film screenplay for the then projected The Spy Who Loved Me film it is clear that an in-depth study of Burgess and the James Bond phenomenon would be a very worthy academic and intellectual exercise for a future more in-depth paper on the subject and the full content of Burgess’s screenplay. Until then the case of Anthony Burgess and The Spy Who Loved Me is hereby closed pending further inquiry. Therefore the case for the prosecution of Anthony Burgess for crimes against fidelity to Ian Fleming is not proved beyond reasonable doubt (the margin being 99.9%).

Judgment deferred - to be continued in Part Two...


This article is dedicated to the Memory of Greg Ferrell (SirHenryLeeChaChing on MI6 Community) (1961-2014) who sadly passed away in January 2014.

Email ThisBlogThis!Share to TwitterShare to FacebookShare to Pinterest
Labels: Anthony Burgess, Parody, Scripts, The Spy Who Loved Me (1977)

Part 1 of the 'Anthony Burgess and James Bond' Miniseries In his Preface to the Coronet Books editions of the original Ian Fle...

Promote your Page too

Member of the Internet James Bond fan community since 10 May 2002.